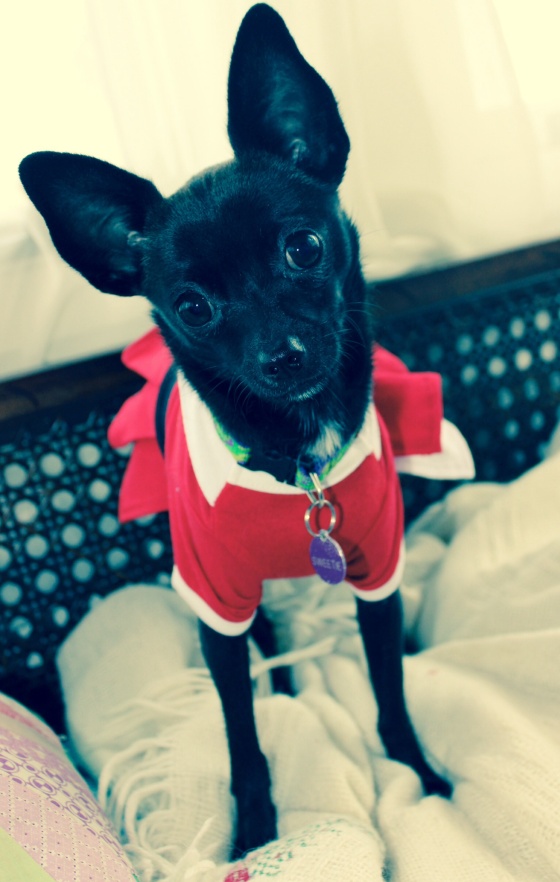 “You’ve got a job to do,” I told Tinkerbelle this morning.

Though I knew she probably didn’t understand.

I’m pretty sure dressing up in a Mrs. Santa Claus costume wasn’t exactly something Tink had signed up for.

“But Tinkerbelle, spreading holiday cheer this December is even more important than usual.” I added.

“After all, the news lately hasn’t been exactly sweetness and light so I was thinking you could help out a little. You know, maybe spread some of that fairy dust around.”

She finally seemed to acquiesce.

So I quickly slid the little red dress over Tink’s head as she excitedly tried to chew off the $1.00 thrift store price tag.

And she appeared even more excited once she eyed the original $20.00 tag directly underneath.

I’m pretty sure it was my imagination again.

Still, I told Tink we’d be donating the difference to the food shelf which is one of the many causes the thrift shop supports next door.

She then looked up at me for a while and slowly licked my hand.

In turn, I rewarded Tink with a treat which she immediately carried over to her chi-brother Rex’s food bowl.

I watched her drop it in.

It seems that Tink maybe one very sweet, and smart little cookie after all. 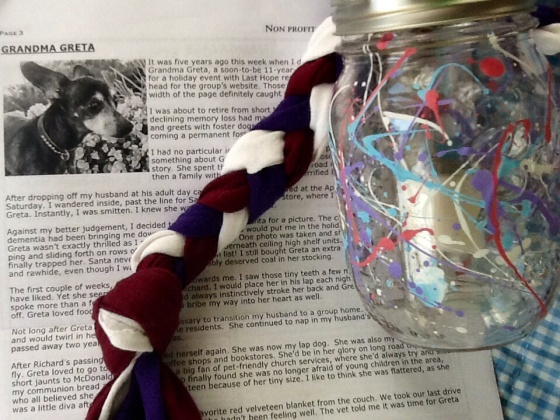 While balancing 55 hour work weeks and caretaking responsibilities a few years ago I came to an important realization.

Mom and my husband Richard were both suffering from late stage dementia at the time, and I also had a teen and grandchild at home still needing support.

I was running short on sleep, and even shorter on spirit.

Then one Saturday morning I slid down to the kitchen floor to scratch my corgi Maddie’s belly. In response, she licked my hand and looked up at me with soulful eyes full of love.

Then and there I realized this sweet corgi and the rest of my canine crew were there as my own caretakers.

Specifically caretakers of one very shaky spirit and soul.

I was not alone.

As a result, along with Alzheimer’s non profits, dog related causes have been a yearly recipient of my annual donation dollars.

But this year, those dollars given to the dogs have been less than I’d like due to unpredicted expenses.

I’d been feeling a little guilty, until meeting up with two spirited grade schoolers at a neighborhood festival last weekend.

They both had a love for animals, and a vision.

The first shy brown eyed brunette sat at a table with her father collecting dollars for dogs found roaming in Costa Rica that they’d met on a recent trip. She made brightly colored candle holders out of paint and canning jars to sell for the cause.

I emptied my left pocket and added all the coins I pulled to their bucket.

A few tables down, I met another sweet girl who had a different idea to help out the dogs.

She was busily selling dog toys she and her Girl Scout group assembled to support the pound where I adopted my dog Rex in December.

After asking her to pick out a special toy for my boy, she did so proudly selecting one of deep burgundy and blue that she had made.

I emptied my right pocket this time, knowing these pups needed the donation more than I needed the grilled hot dog I was smelling from the stand behind me.

Driving home, I was happy I’d been able to help the dogs some. Yet I was still a little regretful I couldn’t do more or had the vision to help in a creative way like the two young girls I’d just met.

But then after looking at a newsletter I pulled from my mailbox after pulling into my driveway, I reconsidered.

The rescue group that I’d adopted my chi Grandma Greta from republished a post in it that I’d written in early December right after she passed. I’d talked in the piece about what this old girl meant to my spirit and that of others. https://quiltofmissingmemories.wordpress.com/2015/12/02/christmas-story/

In the same issue, the group mentioned a total of over 700 dogs that they helped last year.

If even half of those new owners donated only a dollar in honor of a second hand dog, maybe I have helped in more than a minor way.

And also in a creative one.

I thought the same as I also looked back on another post that the local pound republished of mine on Facebook in late December after I adopted my pup Rex. I wrote about what this little guy is doing for my soul and spirit today. https://quiltofmissingmemories.wordpress.com/2015/12/19/handsome-man/

The pound received over 700 likes on the piece. If even half of those readers donate as well, perhaps I’ve made more of a difference for the dogs than I’d ever realized.

Though arthritis limits what I contribute by hand, perhaps I can continue giving with my words and as many coins as I can muster.

My canine caretakers have given me so much.

I owe it to their legacy to try and do the same.