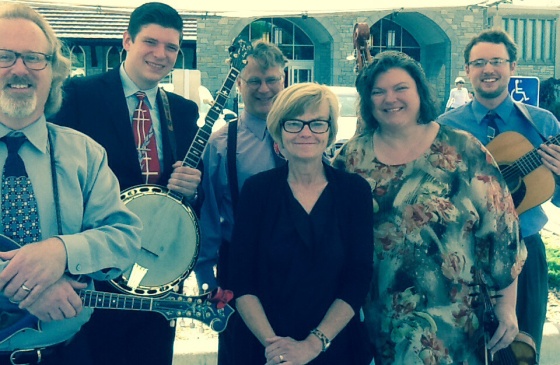 I purposely parked on a pretty tree lined street this morning so I could walk smelling the freshly mowed grass in the shade.

Crossing the creek, I saw my final destination in the distance.

It was both a church and a community volunteer fair.

The church had invited a local bluegrass band called Monroe Crossing to be part of their morning service and to help celebrate volunteerism at the fair.

I’m in a Facebook creative arts group with a friend named Candy, a talented photographer and blogger, from Vermont. https://candyinvt.wordpress.com/author/candyinvt/

Candy had just met the band last month when she was singing with her choir at another church in Hoosick Falls, NY.

It’s a community of particularly nice folks who once helped me out when I got lost rushing to an airport in Albany.

Candy told me I just had to hear them play in my town and to say hello to the female singer Lisa on her behalf.

I know this church venue in my community well, having attended their church camp as a teen and some of their services over the years.

It’s a large city place of worship, yet with a small town feel. In spite of its size, I recognized the name of one of the two members who had passed this last week.

He’d been very active in the community and through his work had become a good friend of my late father’s.

Back outside after the service, I recognized and spoke to another smiling woman who worked with my daughter at the same church camp 35 years later. She was looking for volunteers.

And at a nearby table I met the community volunteer coordinator at a local care facility where I’d considered placing my husband in his final days.

I saw her sign asking for pet visitors. When I mentioned my chi mix Rex back at home her eyes lit up.

One of the residents had been particularly devastated when her chis had to be re-homed after she’d moved in recently.

“Rex is up to the challenge,” I told her.

A woman listening at the next table wondered if Rex could make visits to her adult day care program also. I remembered her name as she shared it with me. I had spoken with her several years ago about my husband.

Though Rex isn’t fully trained yet as a therapy dog, he can start with both groups right away.

Looks like Rex’s community is growing as fast as the corn since moving up here from the south in December.

On my way back to the tent where the blue grass band was now playing, I stopped to pick the group up some mini donuts at the stand behind me. I’d heard a band member mention that sweet scent of the warm sugar blowing by in the breeze.

But first I stopped to greet a small five year old just as sweet in sun glasses who was calling my name. He attends the school where I work several towns away.

Once I introduced the donuts and myself to the band Monroe Crossing, we spoke of our mutual friend Candy, and the friendly community of Hoosick Falls.

And then the band members insisted we all take a picture together.

After, I whistled their songs crossing back over the creek to my car.

And then I smiled thinking how fortunate we are to have so many communities in our lives, big and small.

And also, how blessed. 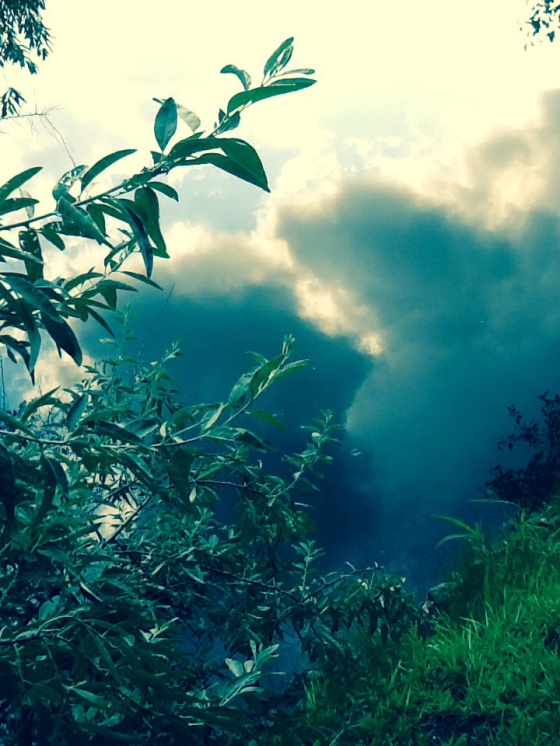 Singing happy songs.
Gray skies are going to clear up.
Blue clouds chime on in.

Rhapsodies in blue.
High notes peak with evening’s sky.
Waltzing in a breeze. 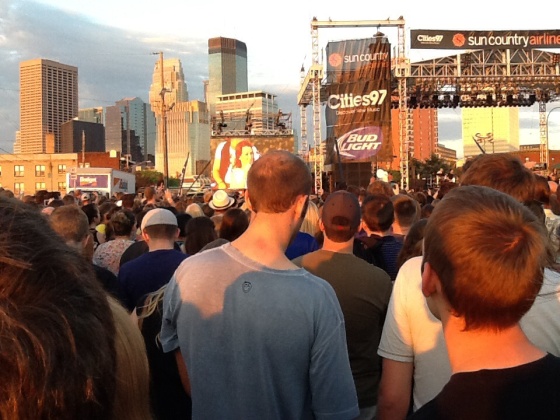 We prepare to leave the bistro in pouring rain to join the big music block party down the street.

A first for me.

Actually my first rock concert ever, which is why it ended up on my ’50 by 60′ bucket list.

My friends pull their tickets from their wallets.

Just a I realize mine is back on the bulletin board at home.

Return home and skip the concert?

Or party on, and buy another ticket?

As we walk outside, the sun instantly re-appears against a brilliant blue sky back drop.

I buy another ticket while others in the crowd silently recite the mantra, “Praise the loud!”

Understand this is not a religious event, which is why the volume is being praised on the event’s t-shirts.

Yet the proceeds benefit the continuing restoration of a beautiful church and city landmark, the Basilica of Saint Mary as well as the needy in the community. A unique event and partnership, it’s now in its twentieth year.

One of the three big stages sits directly in front of a 1930s statue of Father Hennepin who seems to be blessing the crowd of 15,000 plus this night, as well as this beaux-arts style, century old Catholic Church behind it.

After my portrait is taken ‘with the Pope’ as I enter, we’re more than ready to start ‘praising the loud’.

My friends and I start to move strategically from stage to stage listening to several bands. Finally positioning ourselves near the front of the Sun Country stage to hear our favorite closing act, the San Francisco group Train.

The growing crowd starts to roar in anticipation.

I sing an impromptu duet of Train’s hit “Soul Sister” with a guy half my age who’s standing next to me.

We both agree we’re not half bad.

Suddenly we hear the ear deafening sound of train engines announcing the arrival of our headliner.

As the crowd spots the band’s members, thousands of photo snapping smart phones all rise in salute.

Quickly followed by loyal fans joyously singing and dancing with the band.

My friends and I do as well.

But soon I realize I might be here for a second reason.

The couple behind me and I stand prepared to catch the younger dancing fans to my right who’ve climbed up on recycling cans for the last two numbers.

She catches her balance just as she’s about to transform into heavy falling timber.

I take a deep breath, then smile as I look up back at the glorious full moon over the stage.

I think to myself it’s sure been a night full of blessings.

And not even one mosquito.

In the Midwest in July, that surely counts as a miracle.

I know I should be home paying bills.

But I’m sitting on the dock of the bay.

With my old corgi girlfriend, Maddie.

The 1906 steam boat pulls in from the next town, loaded down with music hungry folk.

We’re ready now for the concert to begin, right in front of the train depot.

“The High 48s Bluegrass Band” suddenly hits their banjos with the first number.

And they’ve chosen a train song.

She really loves her box cars.

Our eyes travel for a moment.

We notice the blue sky above is as bright as the water below.

And it’s topped with scoops of cotton candy clouds

Glancing back towards the band, Maddie and I realize the boys are all wearing fancy suits.

I tell Maddie I’ll be asking them why.

“There’s just got to be a story. Maybe they hit the second hand store on the way over”.

Speaking of bargains, the concert is free.

And so are the sounds from the clapping crowds and views of the sailboats gliding across the lake.

I couldn’t have bought Maddie and me a more beautiful night if I’d tried.

That is until the boys start strumming and singing one very lively and special tune called, “The Train has Left the Station.”

We travel right up the depot steps to buy ourselves a CD.

Blissfully enjoying every last note as we stand in line to hand over my last ten. 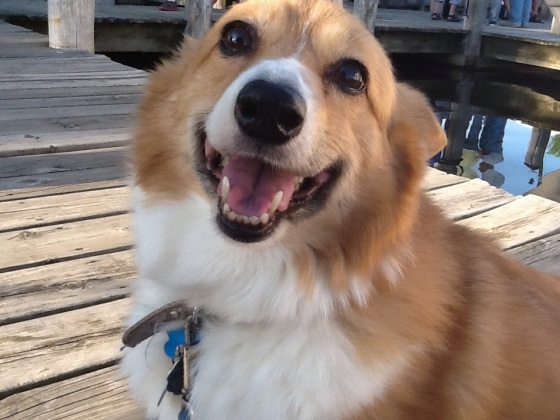 Skipping tasks at hand.
I’ll linger for the music.
Regrets, there are few. 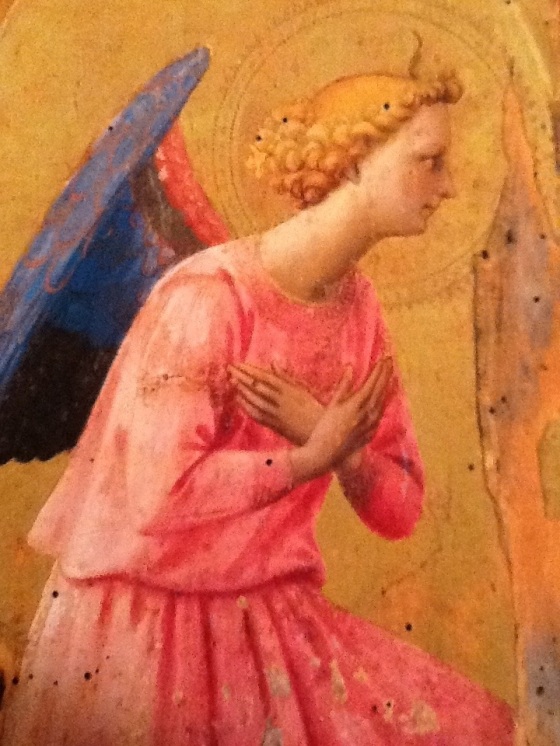 Today is my husband Richard’s birthday.

I like to think it was a good one for him, in spite of his hospice situation. I do know I saw some smiles on that still handsome face this morning.

We greeted friends, family and staff with holiday cupcakes. The wise hospital chaplain stopped by again to extend birthday wishes as well.

Richard was serenaded by two music therapists with beautiful voices, one with a guitar. A small hospital room soon made rich with Irish lullabies, Christmas carols and old Beatle tunes.

Richard appeared to enjoy them all and was particularly at peace listening to a duet of “Silent Night.”

“Let if Be,” written by Paul McCartney, was my favorite and also the most emotional for the rest of us. Particularly the first two lines:

So perfect, I thought.