And I’ve often found the words ring even more true when talking about our dogs.

As my fourteen year old lame corgi Maddie continued to struggle last summer with various health issues, I was already feeling an all too familiar void coming my way.

While lamenting with a fellow corgi owner strolling by with his own corgi pup, I was advised to adopt another dog before Maddie passed on “to help ease the pain.”

He was speaking from his own experience.

“Thanks for the suggestion,” I said dismissing the advice right after our conversation.

After all, I still had a couple of four legged friends back at home.

Yet I knew the hole in my heart was growing as Maddie’s days continued to shrink.

I suppose it was no surprise that I found myself stopping by a small rural shelter one afternoon while driving out in the country.

I’d been visiting a nearby cemetery where my parents and brother were buried, and was feeling a little blue.

As I first entered the shelter, I immediately spotted a white, five pound dog dancing with joy as he first saw me.

The silver wispy curls shining like a halo on his head reminded me some of Clarence the angel.

And this little fellow was clearly a senior as well.

Estimated to be about ten years old, the dog was a dirty, matted mess when he’d first arrived at the shelter. He had so much hair on his body that the staff could only guess at the breed hidden below.

This former stray was gifted the name Dirty Harry, cleaned up, and had since been shaved down.

A half hour after my arrival a smiling Harry and a smiling me walked together out of the shelter after completing the adoption paperwork.

But I chose to leave the dirty part of his name far behind.

Once back in my home, Harry quickly got to work befriending Maddie as she rested on her cozy plaid dog bed in the kitchen.

Harry would share his sweet smiles and dancing acumen in spontaneous recitals of joy right next to the stove.

Maddie appeared to approve of her new friend, watching every move.

She once loved to dance herself on her short hind legs years prior to her lameness.

Harry seemed to fall in love quickly with his new big sister, joining Maddie in her pet stroller on our trips to the farmer’s market and for outdoor band concerts down by the lake.

And also on that comfy dog bed.

Yet just two months and a day after Harry’s adoption, the music suddenly stopped.

Harry left us while sleeping on my shoulder, just like he did every night.

My vet suspected Harry was much older than ten and detected a heart murmur, though it was still unclear why Harry had died that evening.

But one day a week later it became clear to me.

Earlier that morning Maddie had passed on as well.

I like to think Harry, her new friend and protector, had come back to get her.

He was a special angel after all.

This little guardian and guide granted Maddie the wings to finally move on to a more beautiful place where she could kick up her heels and run free once more.

Yet my heart remains full, just at the thought. 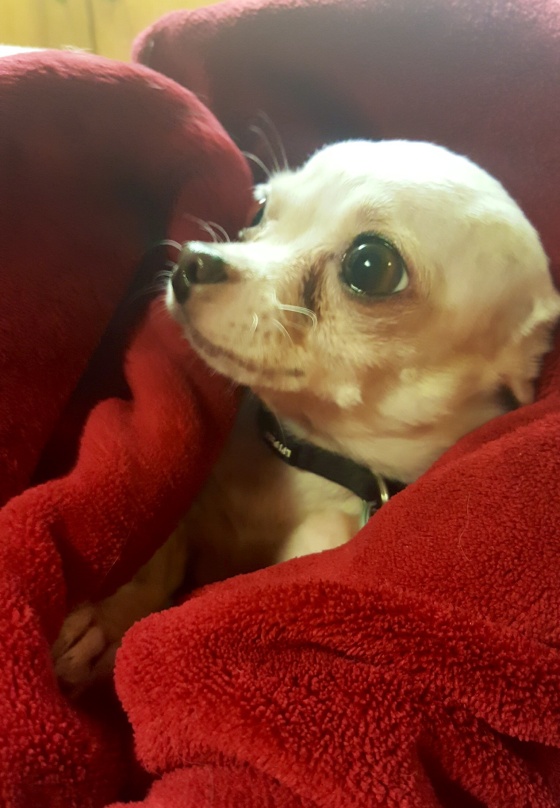 Sometimes an angel comes into your life.

If she visits a second time, I call it a blessing.

I’d adopted a scared little senior chi named Greta about seven years ago. For the first few months, Greta was terrified of me and most everyone else she encountered. My vet even had to muzzle Greta for her visits as Greta’s great fear sometimes transfered to a display of aggression when frightened.

Yet Greta’s heart would melt whenever she heard the voice of a special lady named Patty each time I had to board her.

In fact, Greta would take off in a run and leap up into her arms as soon as Patty entered the room. I began to think of Patty as a ‘chi whisperer.’

Eventually Greta did mellow and we had six wonderful years together before she passed away last year.

I had been thinking that someday I would adopt a senior dog again. Perhaps another chihuahua to keep my young chi-terrier Rex company.

Occasionally I’d research available senior chihuahuas online and had stopped by to meet a couple of them at local shelters. They were all sweet pups, but I was looking for just the right personality to mesh with my household.

I thought I would wait until spring until one rainy Friday night I spotted a special little girl on a local rescue group’s website.

In fact, she was VERY little.

Junie B. Jones’s bio said she was two pounds and a little over six years of age. Must be a error, I thought. I figured the numbers had been transposed and the little girl in the picture was actually 6 pounds in weight and two years old.

Still curious, I decided to drive over to the shelter just to take a look before they closed.

I found Junie B. resting over in a crate by the puppies.

And she sure was tiny.

Weighing in at just 2.9 pounds, Junie B. wasn’t looking too happy and wasn’t eating. Found as a stray in a big city alley, she’d just started meds for kennel cough that morning and was also recovering from several tooth extractions.

Yet I sensed a special sparkle beneath that sad expression as I held her shaking little body for a while.

I decided to put her on hold with a adoption specialist as it was near closing time. I needed to mull this adoption decision through overnight I thought.

I admit I was trying to talk myself out of an adopting later that evening. Junie B. was a little younger and definitely smaller than I was looking for, and with the way she was feeling I couldn’t really be sure of her temperament.

Yet there was that look of love Junie B. had given me as I held her. With much effort she had slowly raised her tiny head up as if to say, “Can you take me home?”

The following afternoon I returned to the shelter to check back on Junie B.

Still unsure of my final decision while walking into the building, I made my way back over by to the puppies where I found Junie B. still resting. She lifted her head again and looked at me straight in the eye.

It seemed as if she was smiling and had recognized me.

Or was I just imagining it, I wondered?

The two of us soon entered a small room to get reacquainted. A shelter volunteer stopped by to answer any additional medical questions I had. Then we both gave Junie B. treats that she happily accepted.

Afterwards, I waited on the busy adoption floor to speak to the next available adoption specialist. I soon found myself becoming a protective mother hen of Junie B. She was attracting a lot of attention from visiting children in the puppy area who were amazed at Junie B.’s tiny size, yet mature age.

I just wanted her to get some more sleep.

Suddenly I saw two female employees cut through the crowd to approach Junie B. The pair looked concerned. One of them opened her crate. A little nervous, I walked on over to see what was happening.

They appeared to be vet technicians checking in on Junie B., and they were trying to figure out why she still wasn’t eating.

“Oh, but she is,” I said as the taller of the two turned my direction. ”Junie B. was just enjoying some treats.”

I immediately recognized the pleasant face before me and remembered the distinctive voice.

It was Patty, the same woman who had cared so lovingly for my first chihuahua Greta at the boarding facility across town, and had now done the same for little Junie B.

Just as I started to reintroduce myself, we were joined by the adoption specialist. Soon all of us were smiling, and more than my eyes were moist as I told Patty how Greta had passed on and that I had put a hold in place on Junie B.

We all knew then and there that the sweet girl before us was going home with very lucky me.

As my new pup and I left, I was thinking what a gift it was that Greta received such great care years ago by one angel of a vet tech.

And I smiled, knowing how blessed I am today that Junie B. received such loving care by that very same vet tech.

Perhaps it’s even a miracle.

Angels flock in joy.
Rest well with heavenly peace.
Christmas is a gift.