Looking for some cheer?
Let’s plant deep our seeds of hope.
Peace blooms in our dreams.

Looking for some cheer?
Let’s plant deep our seeds of hope.
Peace blooms in our dreams.

In a world full of hate,
some still get along.

By helping each other,
and hearing their songs.

So what if we’re different,
there’s still much to share.

Thus bringing us closer,
by showing we care.

Peace brings us great comfort,
much more so than toys.

Lets bury the loathing,
and scratch out real joy.

Let’s plan our escape.
Isn’t that spring just beyond?
We can always dream.

You speak with your eyes.
They tell me so much.
Today you need treats.
And one gentle touch.

You’ve got it my friend.
I’ll throw in some sun.
The blues will soon melt.
I’m promising fun.

I’ll always be here.
You’ve been here for me.
We’re still finding joy.
How lucky are we?

Winter’s not so ruff.
Shawls and pink tees.
Love for me.
Warm my tiny heart.

I was tired and cranky as I slowly drove into the garage after work last night.

It had been trash pick up day, and my empty garbage can and recycling bin still needed to be dragged back up to the house.

“I’ll just take care of it in the morning,” I muttered to myself.

But then I noticed my recycling bin had been more than kicked to the curb, and was blocking part of the road.

Irritated at the trash man, I sauntered down the driveway back towards the bin and garbage can.

When I bent down to pick up the bin, something caught my eye up in the sky.

It was a brilliant sunset that stopped me in my tracks.

Fiery shades of red and orange at first, it quickly melted into pastels of pinks and blues.

I took a quick picture, though it fell a bit short of capturing the majestic display in the sky.

But fortunately some of my Facebook friends caught it, and their shots quickly bloomed like sorely needed flowers in my newsfeed.

What a gift, I thought.

I’ll never look at garbage day quite the same.

And I believe it’s just replaced Friday as my favorite day of the week.

The ice around here has been cruel, but not the winter.

Yet both have taken a hiatus, at least for now.

Since its been a long while, I thought I’d walk a country mile.

My hunger for the smells, sights, and sounds of a rural spring were making me weak this morning.

And though our February thaw’s only a tease, I’ll take it.

I found myself leaving behind tax files on the kitchen table to deal with another day.

That day’s already penciled in for Saturday, when the snow and bitter cold’s expected to return.

After all, we know old man winter’s never been a pushover.

My handsome man Rex and I had a special date for a long walk around the lake yesterday.

With bright sunshine and temps 30 degrees above normal, smiles were blooming everywhere.

After our stroll, Rex’s little upturned nose led us to a local neighborhood bistro.

And they were seated near their very jolly owners, of course.

My handsome man insisted I extend our date and join him there for a long, leisurely lunch.

The place was much fancier than our usual Golden Arches lunch spot.

It even had menus, and handsome waiters!

I think Rex may have been a little jealous.

Oh, and of course French fries since it was a bistro after all.

He was trembling in great anticipation of our fancy feast

After ten minutes, a silver platter came out through the patio door just for us.

Rex was so excited that he tried to inhale the whole half pound burger, including the bun, in just one bite!

But lucky for me, that mouth was only big enough for a couple of fries.

Though I did finally cut him a couple of pieces of beef once he settled down.

I also quietly reminded Rex that we’d agreed to split the meal as we weren’t exactly splitting the bill.

He nodded, looking a little sheepish as he chewed.

Once my seven pound handsome man started to snore at my feet, I asked for a doggie bag.

And later we were both glad that I did.

Today Rex and I were each able to enjoy two more meals together of leftover bliss.

“Hey, it’s kind of like three dates in one,” I told him this evening as we savored the last of our fries.

Then Rex lovingly licked my hand.

And I think I even saw him smile.

Though maybe it was the salt. 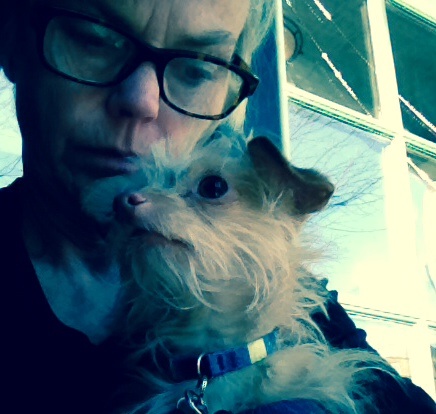 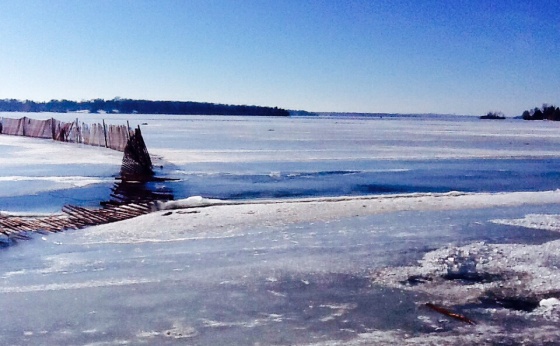 Watch your winter melt.
Stand on shore while eagles soar.
Sun smiles on us all.